BRAID/WORK is a collaborative art project that crosses over and through the disciplines of performance, sculpture and social engagement. It speaks to the history and aesthetics of handwork and braiding culture as well as identity politics, adornment and labor through a process oriented, material and performative lens.

BRAID/WORK is supported by a website, blog, traveling workshops and lectures focusing on the history and practice of African hair braiding through the manipulation of synthetic hair weave. Remnants from the braiding workshops will be collected, photographed and assembled into sculptural work. The culmination of the BRAID/WORK project will include a reception and catalog release on May 15th, 2016 from 1-3pm at the Arts Incubator in Washington Park. All collaborators and participants are encouraged to attend as a way to honor their involvement in the project.

WE ALL SHINE MURAL 🡲 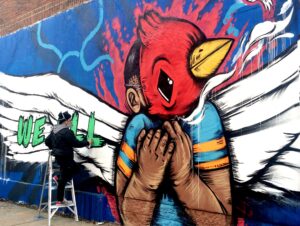 Fatimata Traore | I’m a native African, first generation American citizen in Illinois. My nickname from my grandmother when I was younger was “little girl with golden hands.” I’ve been crafting since I was a very young age.

Read More
I quickly developed my craft as a braider and in 2010 earned an Illinois state license in this work. With my leadership skills, I became the head of all braiders and natural hair stylists in Illinois. I participate in the African Festival of Art and in initiatives to address braiding hygiene, business management, and safety. I also work as a legal and medical interpreter/translator from French-Bambara into English. In 2015-16, I received the “Crossing Boundaries Prize” from Arts + Public Life. I have presented work at the University of Chicago, MCA Chicago, South Side Community Art Center, and Silent Funny. I’m a storyteller with the “One Chicago” project through the Office of the Mayor and work with “Night Out in the Parks” with the Chicago Park District.

Sarah Beth Woods | A Chicago-based multidisciplinary artist, Woods’ background as a painter and critical cultural worker led to an interest in the aesthetics and political implications of modern surfaces and the body, specifically skin and hair, saturated color and shine.

Read More
Cultural influences derived from formative years spent on the Southwest side of Chicago continue to manifest in the content and aesthetics of Woods’ work, specifically black material culture and women’s conceptual spaces as sites of possibility and transformation.

Newcity Magazine named her one of the top 5 Subversively Conceptual Crafters in Chicago in 2014. Woods and Fatimata Traore, a professional hair braider are the recipients of the 2015/2016 Crossing Boundaries Prize through Arts+Public Life & Center for the Study of Race, Politics and Culture at the University of Chicago for their collaboration, BRAID/WORK. Woods is a 2017 3arts 3AP Awardee, which supports Hear the Glow of Electric Lights, a film project investigating 1960s
American music groups featuring teenage girls and young women.