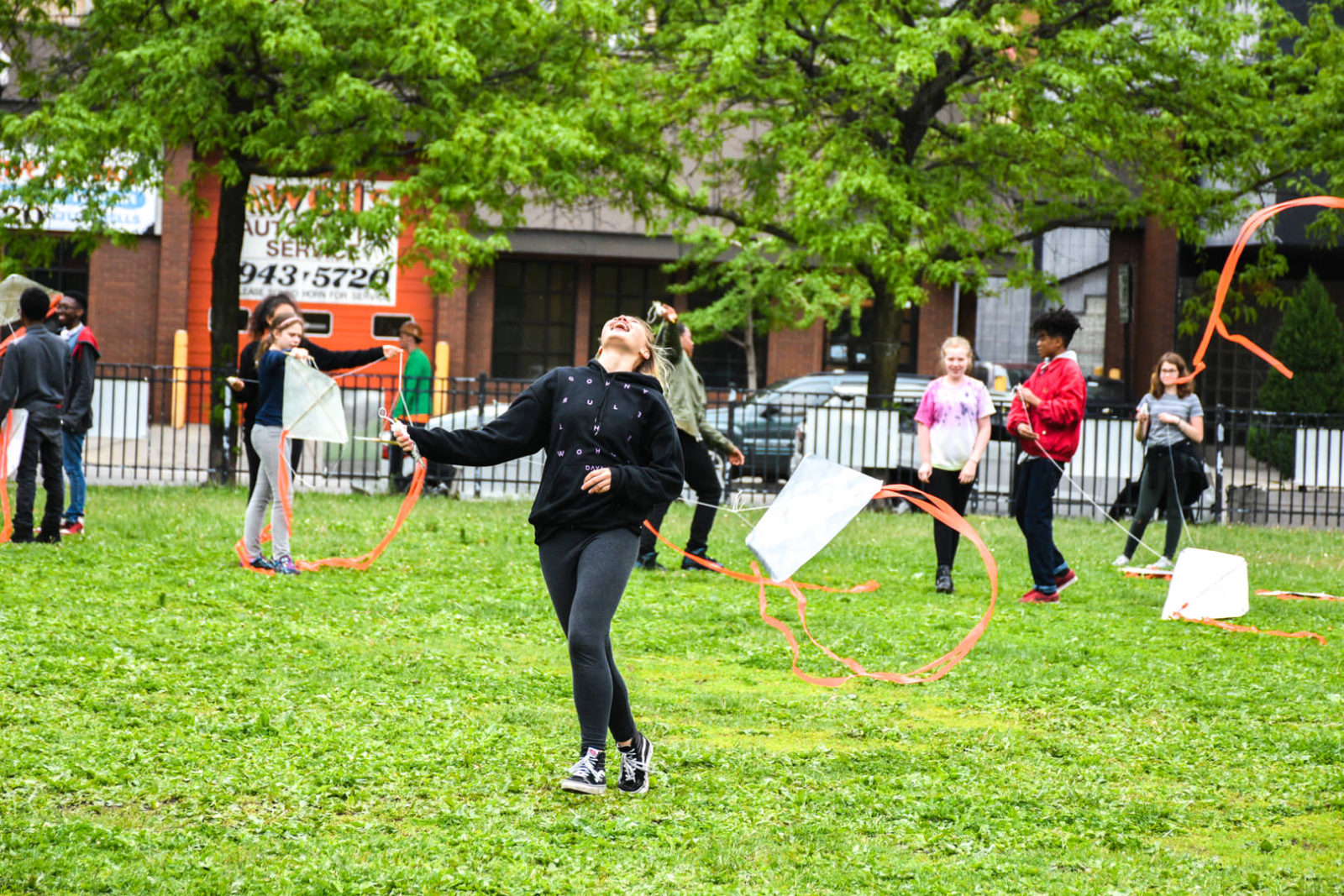 Today was the big day. It was time to fly the kites students and Art on Sedgwick had been developing for the last month and a half. Students from Catherine Cook, Manierre Elementary, and Franklin Fine Arts, as well as community members from Old Town, participated in this art project aimed at telling their own personal stories and together telling the story of Old Town. 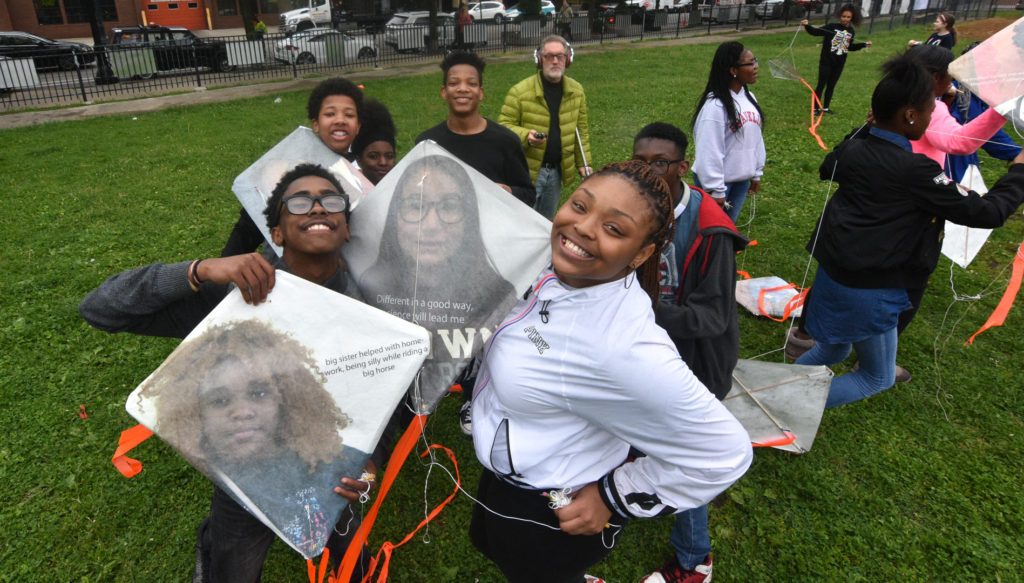 There was a lot of energy and an exciting buzz in the air as Art on Sedgwick organizers and Franklin Fine Arts faculty prepared for the big day. Each participant created a kite carrying their own face on the front. Today, everyone was going to fly the kites and help Cecil create a photograph of all the unique kites and faces flying together.

Speaking of Cecil, he was nowhere to be found. That’s because he was up on the roof of the school! Cecil was setting up the final shot and all of the equipment he needed to take the photograph. 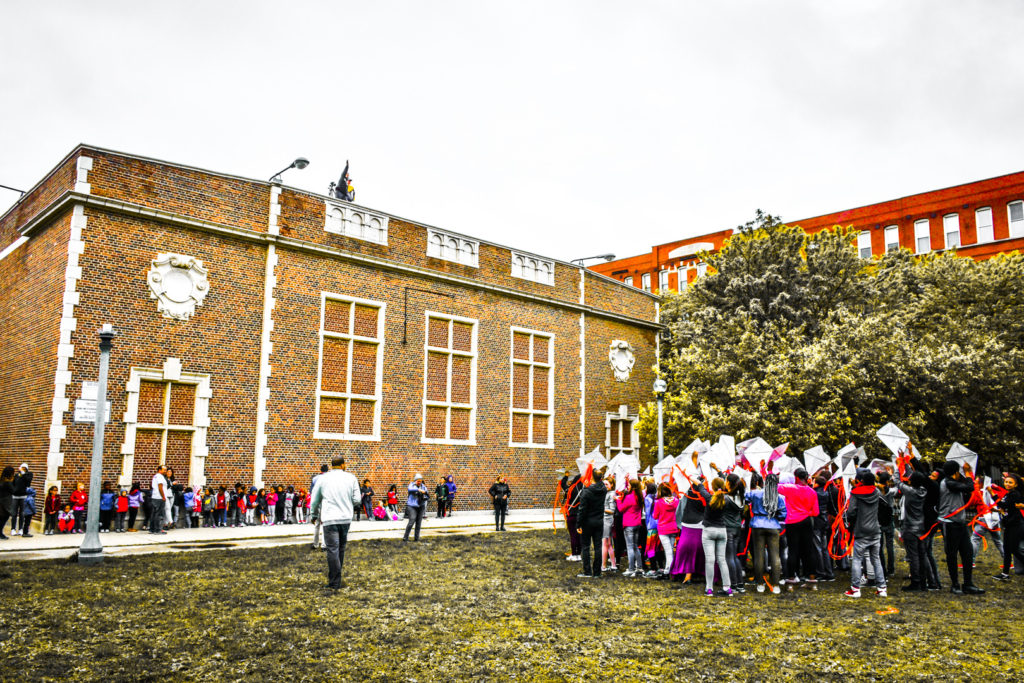 As we organized the kites, things started to unravel and not go completely according to plan.

On the one hand, the weather was questionable. After three straight days of 70-80 degree weather, today was cloudy and potentially going to storm at any second.

Then, Manierre faculty informed AoS that their students would not be able to participate because of major logistics issues. The excited energy started turning into confused concern. A project that, up to this point, had been so phenomenally smooth was moving seemingly in an ill direction.

Students from Franklin that had not participated in the art project volunteered to step in for the Manierre students that couldn’t make it to fly the kites. They would represent their neighbors and make sure the Manierre faces were included in the final photograph. The new students were excited and added another unique and bustling element to the party. 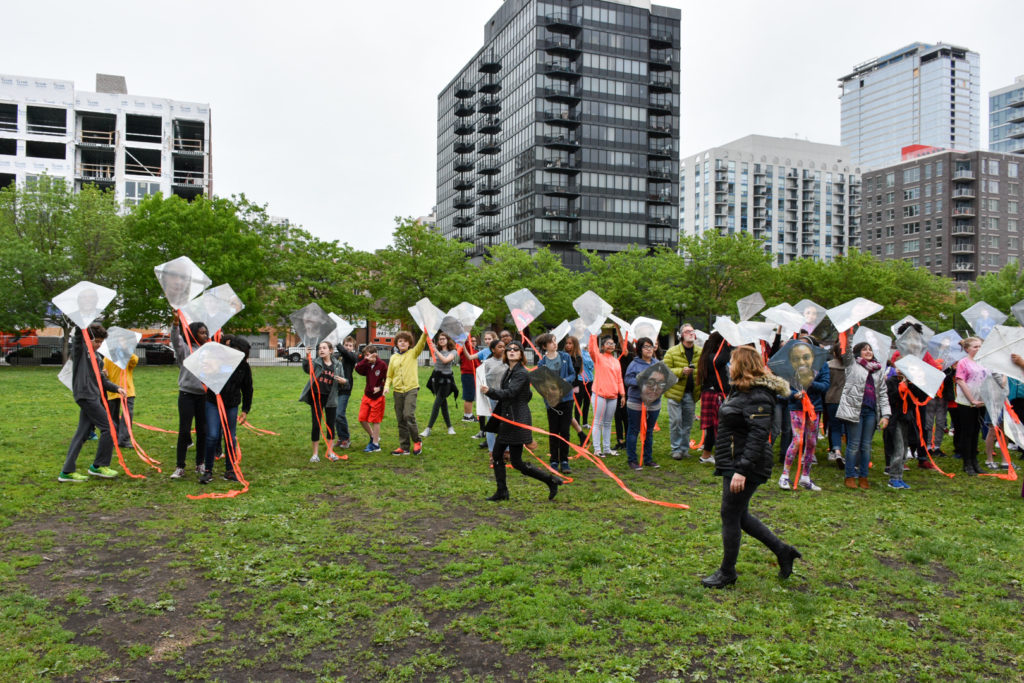 “I guess it’s time to go outside” one teacher murmured.

All of the students gathered in the big grass field outside of the school. Cecil up high overlooking the group. He began calmly waving his hands to direct the group of students and adults, all of them moving slightly to the left in unison as he swayed his hands.

He raised both hands one last time, “Hold them up high!”

Then he began to shoot, peeking in and out of his camera. Students and adults alike held their kites high in the air. 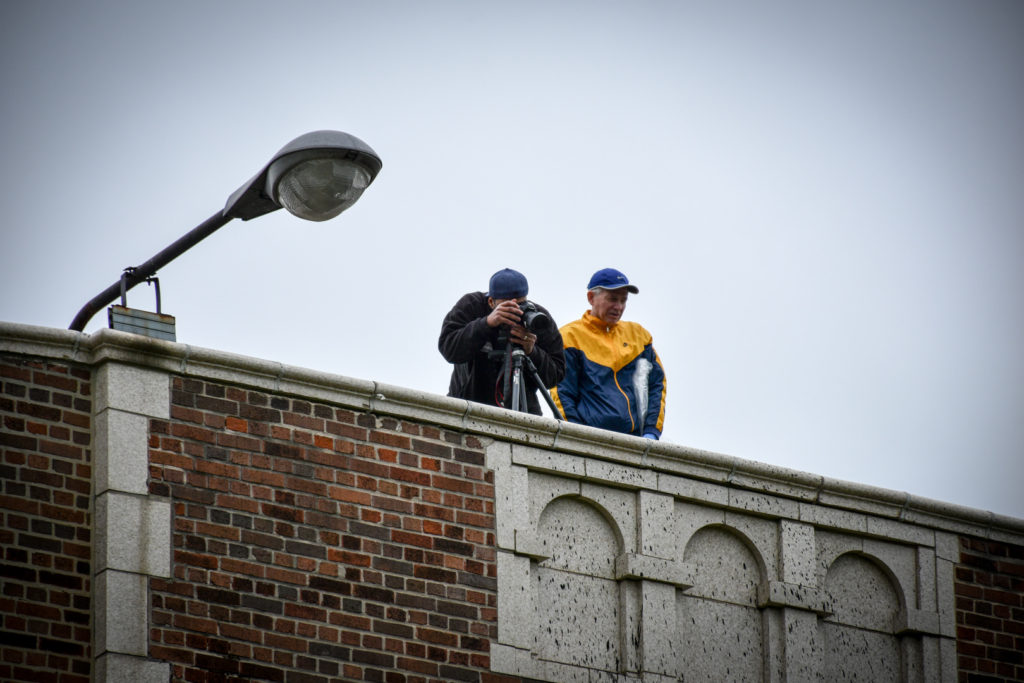 The big group immediately broke off and individuals bolted in every possible direction. Kites were tossed up in the air. There were students, adults, and kites flying around everywhere. It was pure chaos. 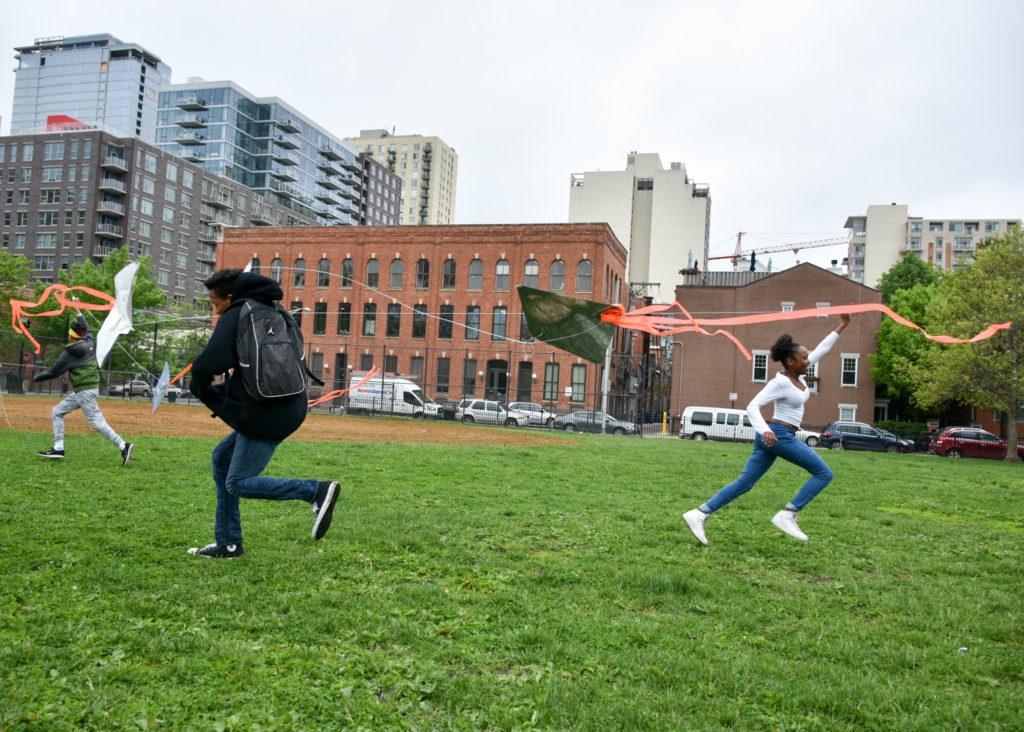 This is exactly what was supposed to happen. There was something magical that erupted during those 20 minutes that followed.

There were students and adults running in every possible direction. Kites were taking off and crashing back down. The orange ribbons tied to the back of the kites ferociously spun in circles as students ran, laughed, fell, and cheered on.

For those twenty minutes, the confusion or stress from earlier turned into an exhilarating and jovial energy. There were kites flying and falling from anywhere you could see. The smiles, laughs, and yelling coming from every angle were incredibly contagious. At that moment, everyone in that field couldn’t help but smile from ear to ear, ducking from swerving kites. 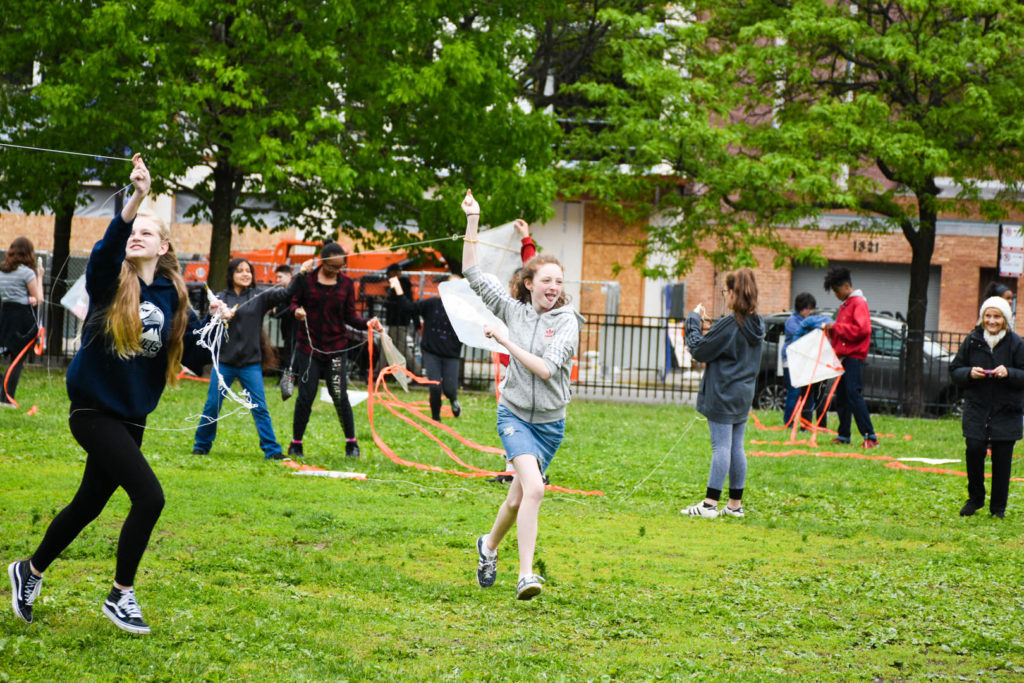 That moment really materialized the beauty of chaos.

What happened in that field was a perfect reflection of the idea that sometimes things just don’t go according to plan, that real life is an effect of unexpected consequences. That reality is always a product of organized chaos. We can’t control everything that happens around us, but we can carry on with a positive mindset and enjoy each other’s company. Life will always happen around us, and it’s up to each individual to join in and together make a meaningful experience out of shared moment.

The students and adults flew their kites and ran around for about 20 minutes. Right when things were wrapping up, a few drops of rain started dropping. Great timing, I’d say.

The most common denominator of everyone standing in the field that afternoon was their smile. Everyone was so clearly impacted from that experience and this amazing art project. Smiles, laughter, and human interaction dominated that afternoon. 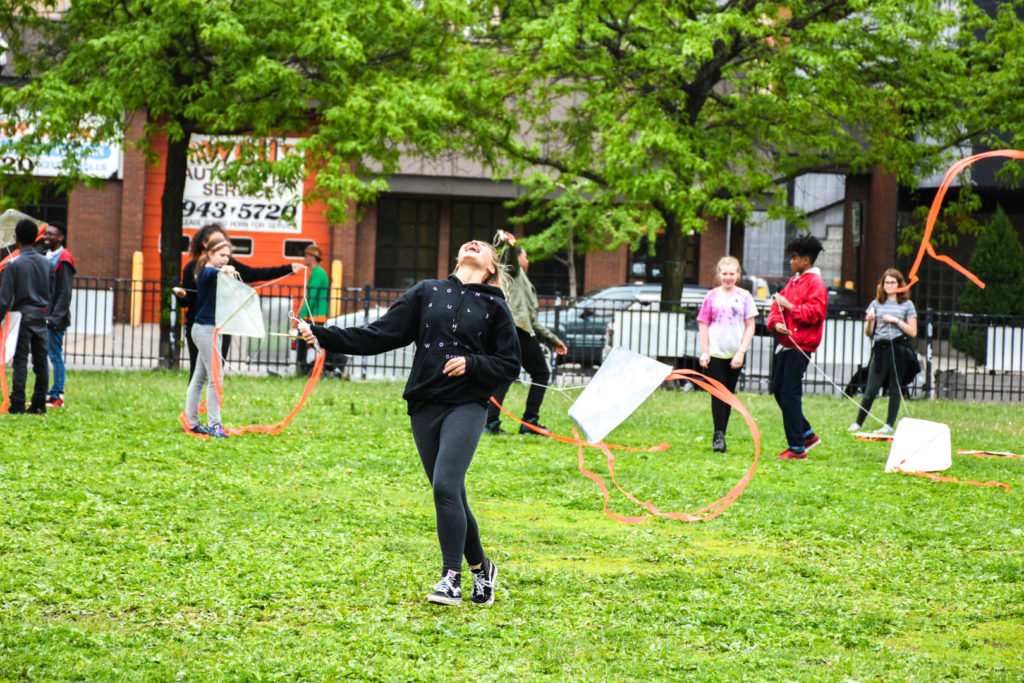 The happiness and humanity in that field were unavoidable.

There will be a presentation of the “My Street, My Voice, Our Story” art project on June 4th at Art on Sedgwick. The entire community is invited to drop by between 2 and 5 PM to experience the exhibit and results of this art project. Don’t hesitate to come on by and join Cecil McDonald Jr., Art on Sedgwick, and students of the Old Town community present their interactive, multimedia art project that together embodies the story of what it means to live in Old Town. 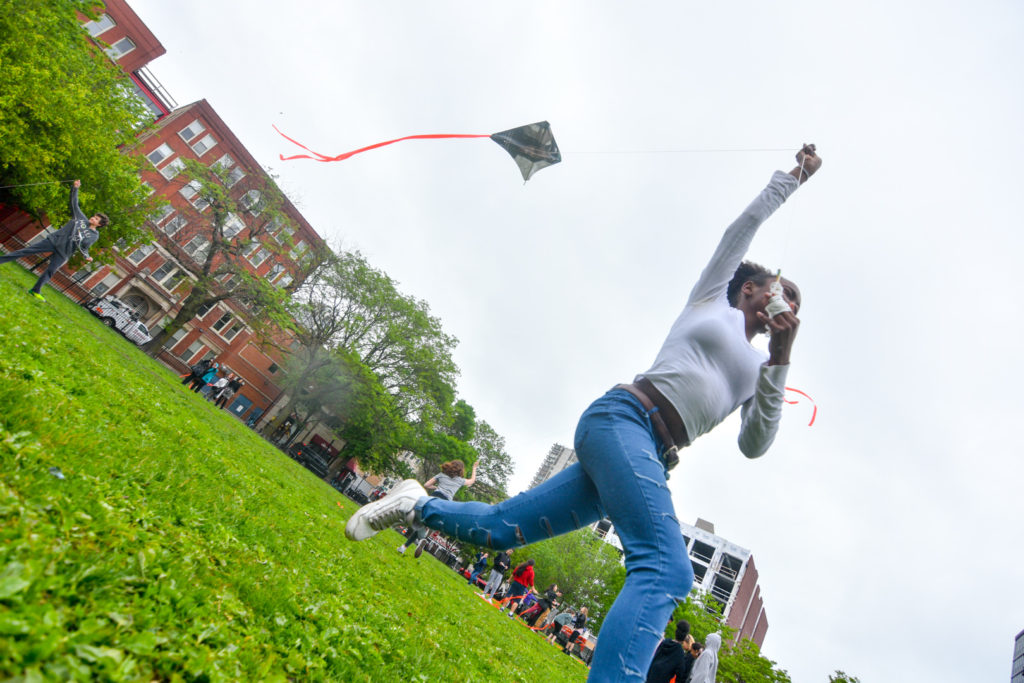 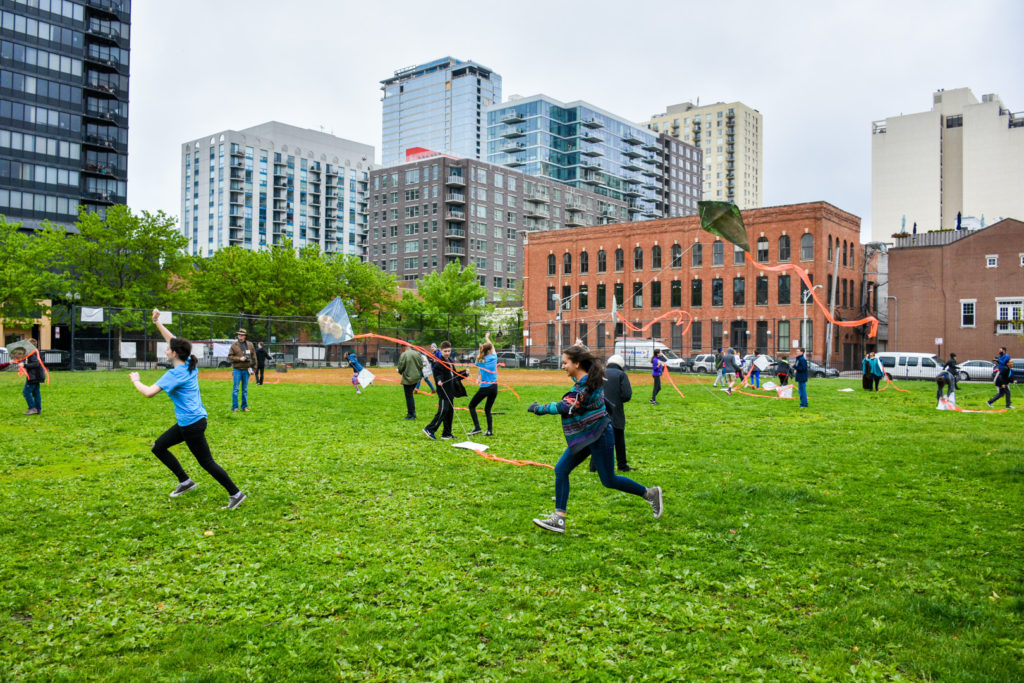 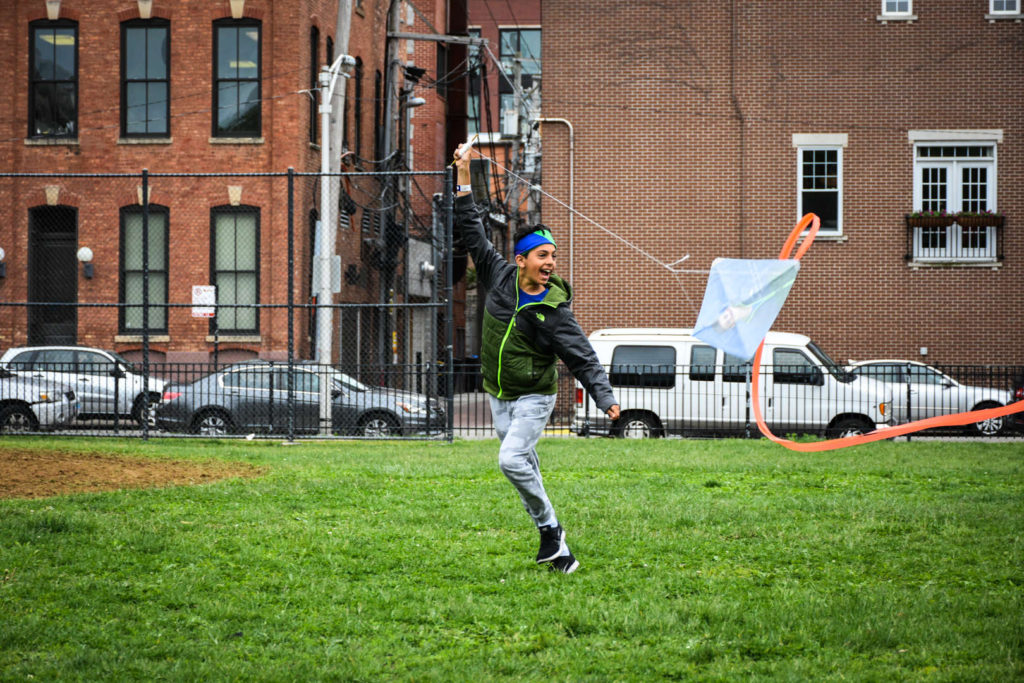 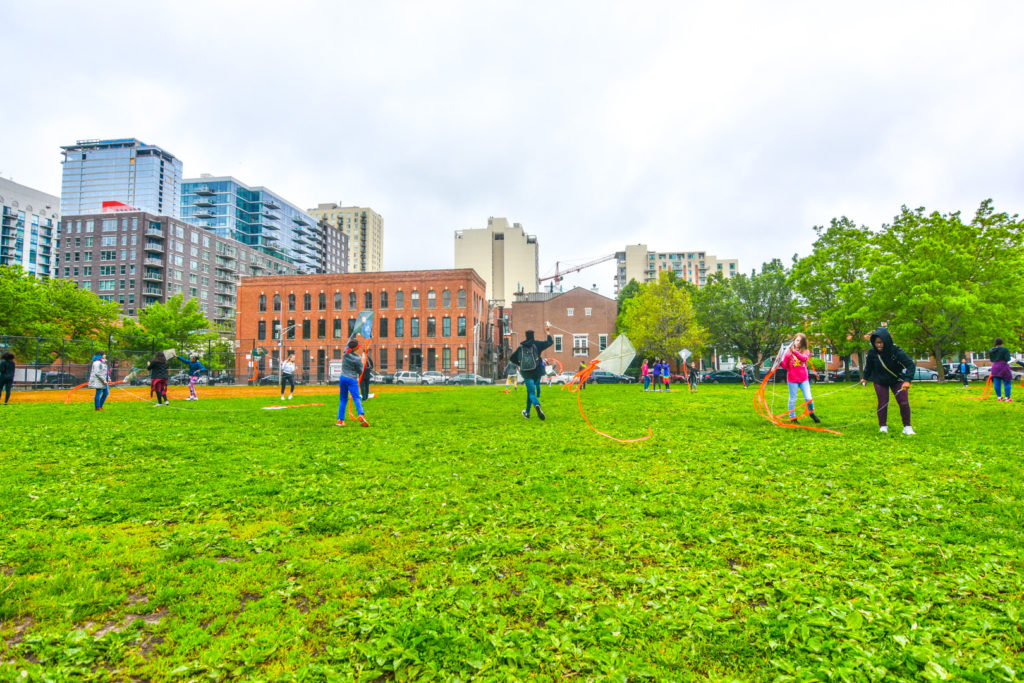 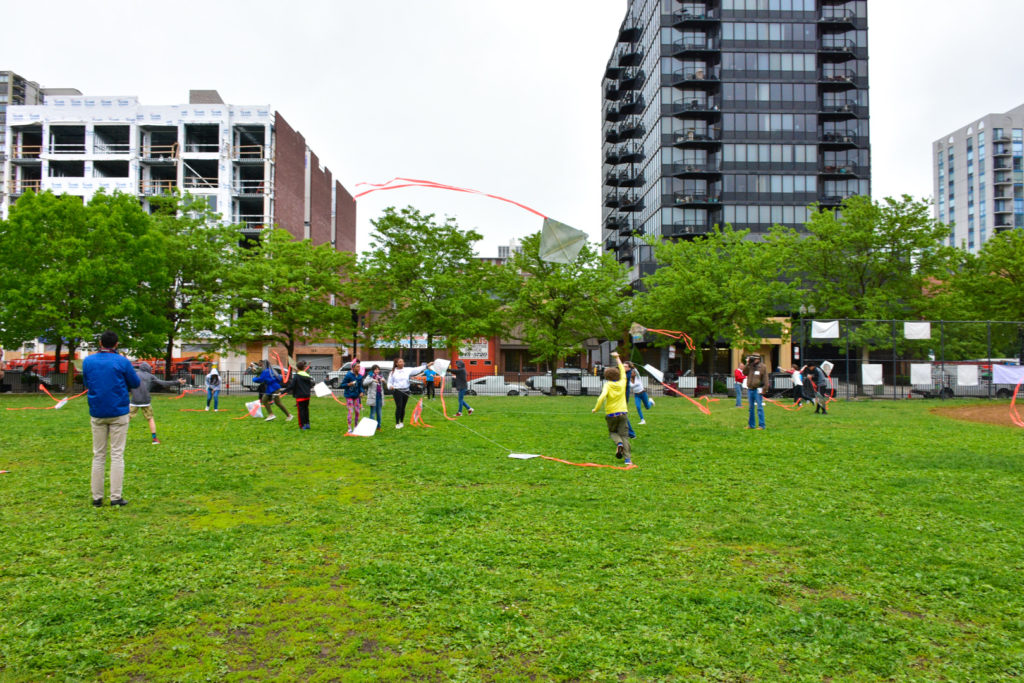