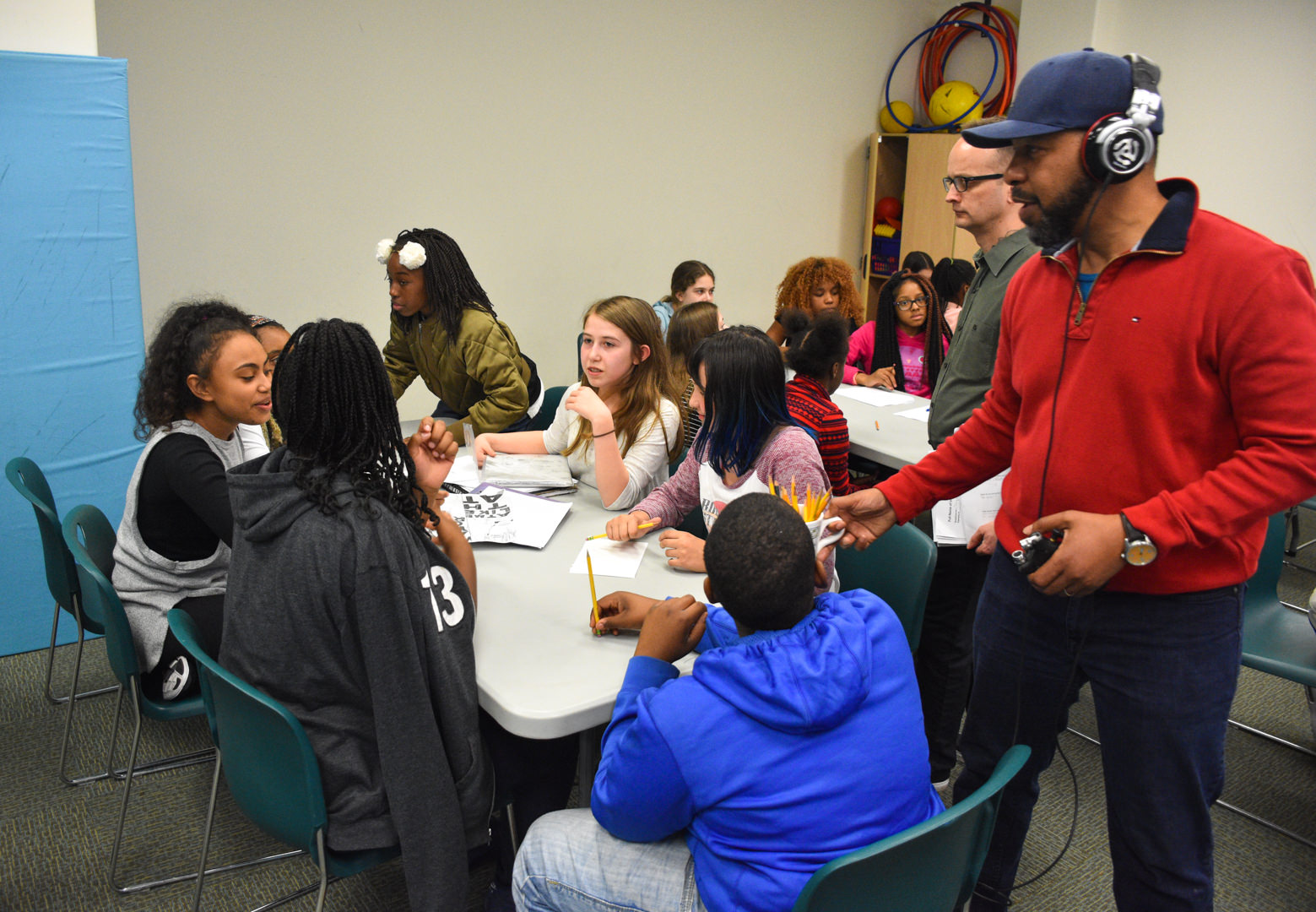 The group made its way into the classroom, nervously, ready to start the second session. Students from Catherine Cook School were walking right into a group of students from Manierre Elementary, also seemingly nervous, both waiting to sit down and interview a stranger. 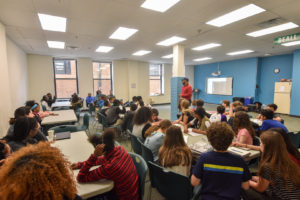 This was the beginning of the next phase in the My Street, My Voice, Our Story art project. In this second step, Cecil McDonald Jr is bringing together two groups of strangers for an interview and photograph session. Students from Manierre Elementary and Catherine Cook are pairing up, as well as students from Franklin Fine Arts Center with adults from the Old Town community,  to conduct interviews, photo shoots, and continue the journey towards crafting their own personal stories.

This afternoon, though, the air was stiff. Students had already completed their introductory session with Cecil and knew what was coming, but interviewing another 12-year old isn’t always the most relaxing task to take on. I mean, you’re interviewing a stranger.

Some students laughed giddily as the group of newcomers walked in. Others looked around seriously, maybe suppressing an emotion or two.

Cecil calmly stepped towards the center of the brightly lit room and got started. His music was already playing, Coltrane’s trumpet sang in the background as Cecil gave a friendly, relaxed, and happy introduction.

“Thanks for coming out here to help me out with this idea. I can’t do this without you.” 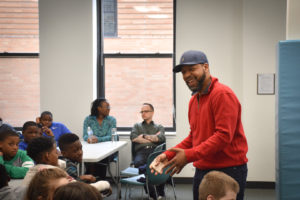 Cecil then went into a personal anecdote. He was really relaxed the entire time, but kind of giddy too like he knew something exciting was about to happen today.

The students laughed, maybe picking up on his energy, and Cecil kept it all moving.

“Alright let’s jump right in. Because that’s what artists do, we experiment and see what happens.”

The students were separated by their school and stood on opposites sides of the room. 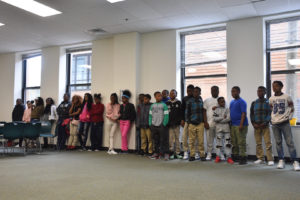 Manierre on one side and Catherine Cook across the room. Cecil lined up the students and assigned them a number, 1-25. Each student was to be paired up with a stranger from the other side of the room that had the same number. Since the numbers were slightly uneven, some girls and boys could even get paired up! The giggles were more nervous than ever.

Cecil walked through the two lines and assigned each student a number.

He then called out number one. 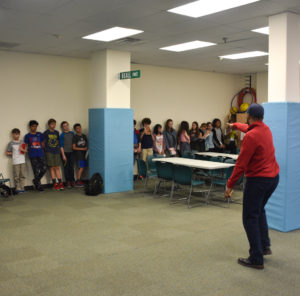 The first two students, bravely, walked towards the middle of the room. They met, right at the center, face-to-face, where Cecil was standing. They looked at each other. One student gave a quick nod, got some eye contact in, and threw his eyes back down to the floor. The other student looked left to right uncomfortably as if something was going on around him. He looked back at his giggling friends and back at his partner. “Hello”, he said. They both turned and walked together toward the seats that had been laid out.

This went on for another twenty or so partnerships. “Fourteen”, Cecil would call out. Both students slowly, and meticulously, walked to the middle of the room, did their I’m meeting a stranger dance, and walked over to the tables. 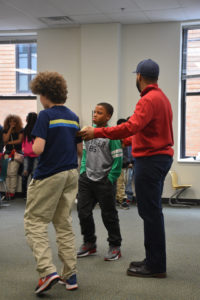 The thing is, Cecil never gave any instructions or told the two partners to meet in the middle of the room. It all just, sort of happened. The first students went with it, and the rest followed suit.

It was symbolic, if anything. It was perfect to watch two groups made up of such different demographics and backgrounds, yet living in the same neighborhood, deliberately cross the room and start to interact. 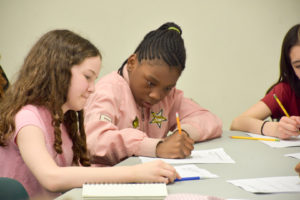 Despite the introductions, the students were still nervous. Even after getting partnered up and sitting down together, they were nervous. Maybe that’s not the perfect word, but there was definitely tension and anxiety in the air. Some students were quiet, stiffly going through the motions. Others were looking around, quickly, like they were questioning every single one of their actions. No one seemed too comfortable or at ease.

As part of the My Street, My Voice, Our Story project Cecil is recording different snippets of the personal interviews. It’s a critical part of the project, and Cecil walked around with a big smile like he knew magic was about to happened.

And as the interviews went on, and time passed, something magical did happen.

About 15 minutes into the session the energy of the room completely shifted. The partners were immensely more relaxed. Everyone was tremendously more comfortable. Kids were smiling at each other and making eye contact that lasted more than a quick 2 seconds. They were stretching their arms, talking naturally, and looking chill as a cucumber. 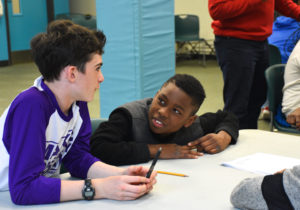 Students would just throw a question out in a monotone “i’m-just-here-because-i-have-to” voice.

Fifteen minutes in, though, the nervousness in the room was gone. Dissipated. The students were comfortable with each other. People were relaxed, excited, and intrigued. There was magic in the air. The room was loud, conversation was flowing, and Cecil was flying around recording voices as they asked or answered a question.

The transformation in the room was powerful. Questions that were initially getting two to three-word responses were now flooding out personal, in-depth stories. 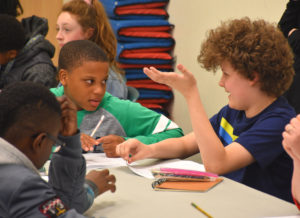 The student being interviewed went into a long story about his friends and his brother. About how this year it was time to pick which high-school to go to, and the pain it caused him. How it created drama in his life in a way he had never experienced, and was actually really sad about. How he knew it was all-good, but told Eugene how he cried for 30 minutes after making the decision.

The student then shed a tear. He wasn’t anxious or worked up. He was calm. He was just telling a friend about a story. These two strangers were sharing an intimate experience together. They had turned into friends.

Eugene had his own devils with school too, and shared his personal experience, thoughts, and learnings about it.

Even though the pair talked about school for about 10 minutes, I couldn’t tell if either actually liked school or not. That simple question, “Do you like school” didn’t get a yes or no response.  And it didn’t matter. What the question did was lead to personal stories. Stories led to conversation. And conversation led to friendship and trust.

What was initially a room full of nervous strangers had transformed into a space full of friends. If you looked around the room, that’s exactly what you’d see. Students were genuinely talking to each other, bringing in others around them, laughing, turning to talk to another group nearby, touching each other’s clothes, faces, and hair. They were sharing genuine human interactions. 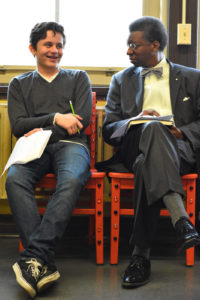 As the interviews wrapped up, the cameras came out. The two partners went on to take pictures of each other. The calming magic still buzzing. Photoshoots tend to be awkward and somewhat stiff. But with this photoshoot, there was no awkwardness. It was intimate. I couldn’t believe how relaxed, present, and excited both photographer and model were.

The interviews and the personal stories brought down walls. Each participant opened up about their personal life and let their guards down. What was at first a pair of very tense strangers had evolved into a trusting relationship. It made it easy to interact.

And that’s precisely what Cecil had mentioned in the introduction session. He spoke about the power of questions, and how pieces of art should inspire questions. Because questions lead to stories. Stories lead to conversations. And conversations open up the environment for growth.

There was a realization in the room that dissipated any uncomfortable feelings. A realization that, at the end of the day, we may be strangers but we all have similar pasts, present, and dreams. We all have our stories. We’re all people.

The air was buzzing with energy as the students packed up and walked out of the room.

Roy Ayer’s, “Everybody Loves the Sunshine” cheered on in the background.

This was a tremendous session and a key piece of the My Street, My Voice, Our Story art project.

In the next session, each student will tell their own personal story using the photos and interviews as the material to build a kite as an embodiment of who they are. Stay tuned for the next phase when Cecil McDonald Jr and Art on Sedgwick help students create their kites!