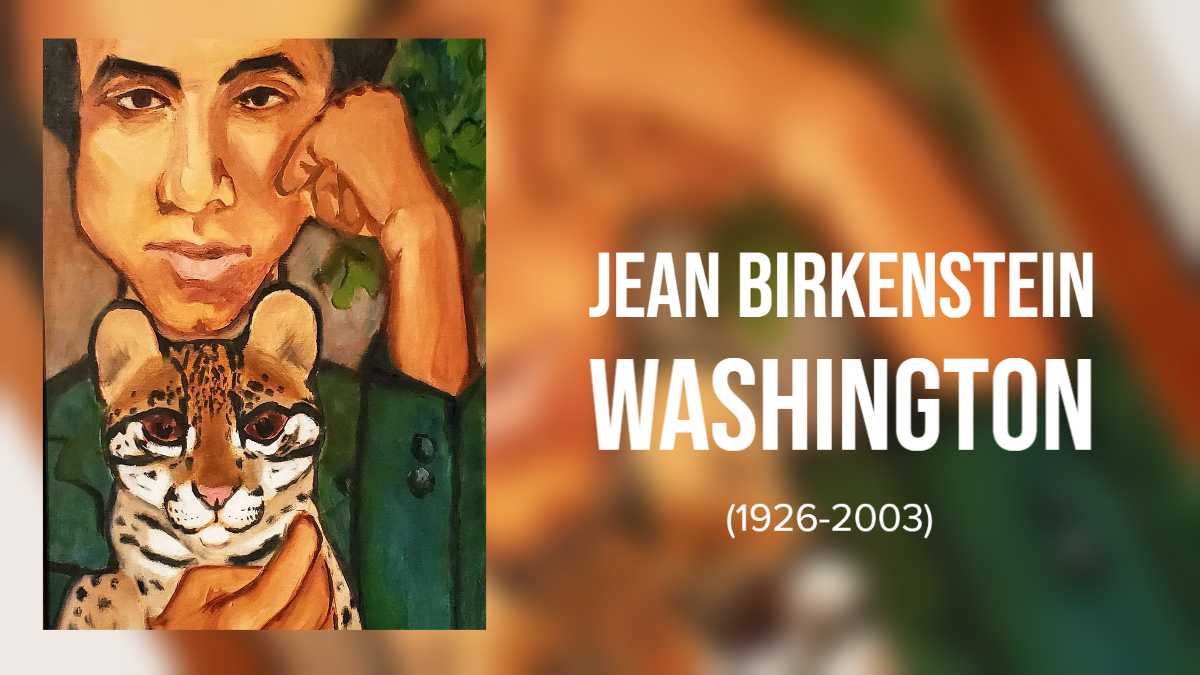 Our exhibit at Madron Gallery includes three paintings by Chicago Artist & Activist Jean Birkenstein Washington (1926-2003), who lived in Old Town at 1424 N Orleans (a block east of Art on Sedgwick) for 35 years.

The home also served as the official headquarters for the magazine Teachers for Integrated Schools and several activist organizations that she led.

Jean’s son, Robin Washington, shared the following story about his family’s house and their time in the neighborhood:

Jean (as everyone called her, even my brother Glen and me), who was Jewish of European descent, and my father, Atlee Washington, who was African American, purchased 1424 N. Orleans in February 1953. Glen was born that September, so they were expecting when they bought it. The house had a restrictive covenant on it, prohibiting “the sale to negroes,” even though the Supreme Court had outlawed restrictive covenants in 1948. Jean had shopped for the house alone, with Atlee being a surprise at closing. Jean did that a lot for other African American buyers around the city.

Before buying the house, Jean and Atlee, who married in 1951, lived in an apartment at 111-113 W. Elm. Both had spent a good part of their childhood or teen years in the neighborhood, Jean at 1209. N. Astor; Atlee, somewhere near Wells and Hill. Jean went to Francis Parker private school; Atlee to Sexton Elementary and Waller (now Lincoln Park).

It’s important to note that while individual streets on the Near North Side may have been segregated (ours was the first black family on that stretch of Orleans Street), the neighborhood as a whole was always integrated, even before Cabrini-Green was built (and initially, Cabrini-Green was integrated). Until the riots of 1968, Marshall Field Garden Apartments was majority white. Atlee and Jean divorced in 1959, and he lived in various apartments in the 1300 block of Sedgwick, then at 1414 in Town & Garden (its most common name then) until 1967, when he bought a house at 332 W. Schiller. The Smith family lived next door at 334 and ended up being the last blacks on the block, finally selling the one-story, two-bedroom, one-bath home in 2017 for $700,000.

As a January 1961 Jet Magazine article about her details, Jean opened up our home as a settlement house for West Side gangs, the Vice Lords and Cobras, for whom the Near North Side was neutral territory. She got to know them as an art teacher at Marshall High School after they heard of her activism with the Congress of Racial Equality and the NAACP, of which she was an officer. She was also a founder of Teachers For Integrated Schools and its national magazine, Integrated Education, both of which were headquartered in our house.

The leaders of TFIS were mostly women and teachers and did not want their names made public because they were afraid of getting fired by the Board of Education. So, at a meeting in our living room, they elected Al Raby (who was there initially to pick up a woman he was dating) to serve as the organization’s president. They also arranged for him to head a newly formed umbrella group, the Coordinating Council of Community Organizations. Through the CCCO, Raby brought Martin Luther King to town for his Chicago Movement. Raby was later Harold Washington’s campaign manager for his successful mayoral run. Harold and my parents had known each other much earlier at Roosevelt University in the late 1940s.

In 1968, the King assassination sparked a riot that went down Sedgwick Street, taking out every business — including the Asian-American owned Sun Cleaners at Schiller, which never returned. Muller’s IGA, the tiny supermarket in the space where Art on Sedgwick is now, was owned by a white proprietor who transferred ownership to an African American associate to create Terry’s IGA. But some white businesses stayed: Cosentino’s hardware, across the street from the IGA, and Fred Oyen’s Rexall Drugs on the corner at Blackhawk. Fred and his family lived a few houses north at 1508, and his family may still own the home.

On April 5, 1968, we were all brought into the auditorium at Franklin School for a special assembly for the Rev. Dr. Martin Luther King, who had been assassinated the evening before. Then we were released early, the girls all crying and the boys pretending to be tough. The teachers were mostly white and several had their cars spit on and rocked by teens who were amassing, though none were hurt.

My cousin was on the front porch of my father’s house at 332 W. Schiller when he saw white people in cars drive toward Sedgwick, where they were taken out and beaten by the now-large mob. He then noticed blacks were being beaten, too. He ran to the corner of Orleans and frantically gestured for all the cars to turn north.

When I got home from Franklin, my brother Glen was at our front door, talking to five to 10 Cobra Stones, the local gang from Cabrini-Green, identified by their red berets. They were asking for Jean. “She ain’t home,” I recall him saying. To this day, I have no idea if they wanted to harm her or, as with her reputation with the Vice Lords, have her represent them to the power structure. They went away quietly.

School districts were manipulated by the Board of Education to match shifting racial boundaries. (Jean and her colleague Faith Rich wrote this up — without a byline — in their study, “De Facto Segregation in Chicago Public Schools,” that ran in the NAACP’s national magazine, “The Crisis,” in 1958).

When Glen entered Franklin in 1959, its district was Division Street to North Avenue, Sedgwick to the lake, and it was entirely integrated, with white kids from the Gold Coast, Puerto Rican and Romany children from what is now the site of Sandburg Village, and black and white kids from Orleans, North Park, Wieland, Schiller, Evergreen, Goethe and Scott (and Sullivan west of Sedgwick). In first grade, Glen had a puppy-love girlfriend who lived on Dearborn.

When Sandburg was built, the Puerto Rican and Romany families were displaced, and Franklin’s eastern boundary moved to LaSalle Street, making it majority, and in a few years, almost exclusively, black. My class pictures reflect this. The Gold Coast area east of LaSalle Street all the way to North Avenue was districted into Ogden, which was much further away for them than Franklin but majority white.

By 1970, Jean was the last white person living on Orleans between Schiller and North. Along with the school district changes, the urban renewal policy helped foster segregation. North of North Avenue, Old Town Triangle had been defined by the diagonal streets of Ogden and Clark. The area is the site of the Old Town Art Fair, now one of the largest in the nation, with Jean as an early exhibitor.

Under urban renewal, Odgen was blocked off to terminate at North, and housing built in its footprint (go there and you can still follow it). Then North Avenue was widened significantly from Wells to Larrabee, taking out several mom-and-pop stores on the north side of the street. A median was added, blocking left turns from Wieland, Orleans, Hudson, etc. — in effect widening the gap between the mostly black and mostly white neighborhoods and very literally prohibiting traffic between them. Obviously, the racial chasm grew, as did property values north of North Avenue. The area south of North became almost all black, except some families on North Park and Wieland, as noted earlier. Town & Garden underwent a questionable remodeling where tenants were relocated into half of the complex for what was supposed to be temporary — only to see white residents move out completely and never return. Crime and poverty in the neighborhood increased and houses were abandoned, then destroyed, by bands of pre-teenagers (I witnessed this directly). Atlee similarly abandoned his Schiller Street property around 1972. Yet Jean remained on Orleans Street.

In the early 1970s, a popular African American couple, Tranquility and Omega Phillips, moved into Town & Garden. Tran started a Black Expo, held at the Olivet Institute next to Manierre School, which I believe became the impetus for the citywide Black Expo at McCormick Place. Jean became a mentor to both, bringing Tran and his Afrocentric friends to astronomy lectures at the Chicago Academy of Sciences and tutoring them in math, the cosmos and ecology. Omega ran a clothing store called “The Stoe,” next to where Art On Sedgwick is now. Mentored by Cosentino, she was growing successful when Tran lost it and killed her, then himself.

In the late 70s, Marion Stamps rose to prominence, establishing the “Tranquility Memorial Community Organization” (though she had not been that close to the Phillips) and later, the Chicago Housing Tenants Organization. Though she did not share the goals of an integrated community, she did give us respect.

Jean sold the house in 1988 to a broker, whom Jean said told her she loved it and wanted to live there herself. It had been the first house built on the block after the Chicago Fire by a German carpenter who built several “cottages” in the neighborhood — and who died the winter of 1871-72 on the roof of his last construction, so the legend goes. The homes are marked by distinctive cornices — I think Fred Oyen’s was one. Ours was said to have been his pride and joy. Jean once led a neighborhood art project making cardboard models of each of the houses. I doubt any survive today, nor would I have any idea where they could be, but they were delightful.

That brings us to where we are today, with the demographics of the neighborhood almost the opposite of what they were when I was growing up. Then, the residents of Marshall Field Gardens were mostly white, and those living on the side streets majority black, though neither area exclusively so and other races sprinkled throughout. The ethnic change can be seen in school class pictures from Franklin, Manierre, LaSalle and Ogden.

As for the changes and similarities in the landscape — the cottages giving way to high rises, and ever-present El — the most telling visual record is in Jean’s art. Her “Across The Street” series, which she painted each winter over 35 years, is the scene looking from her Orleans Street front window. Although Jean and the house are gone, the view, and her vision, live on.